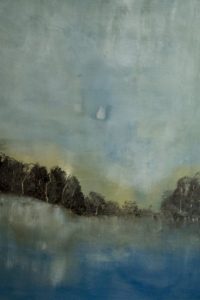 22nd January 2018
By Max Horberry
Currently there are 65 million people displaced around the world, 22 million are seeking asylum in other countries. According to the Red Cross, approximately 119,000 refugees are living in the UK. Many arrive with an array of traumas and the asylum seeking process can aggravate these issues.
Across London there are a small number of groups that help asylum seekers and refugees heal and develop. The New Art Studio (newartstudio.org.uk) provides a space for art therapy. Every week, asylum seekers and refugees can take a full day to paint and draw at their own pace. If they need guidance in their work, whether technical or emotional, that is available to them. Some work alone, others talk and share.

Salim paints in bright colours. He comes from North Africa and one day he decided he couldn’t live in fear anymore. “Every morning when I would go to work,” he says, “I would tell my mother I’m not sure if I’m coming back. There were bombs in the cars and at anytime they could explode.” Salim (who asked that his name be changed for this article) saw friends and family killed. One of his cousins was walking down the street and two people shot him point blank. “Like the Mafia,” he says. “That’s why I said No, this is not life.” He left and 12 years went by before he saw his family again. He spent those 12 years living in uncertainty, not knowing whether he would be sent back or whether his family were alive.

Arriving in an unknown country as an asylum seeker can be terrifying. The effects of trauma can make an unpleasant experience unbearable. Zahra (whose name has also been changed) came over from Iran with her 1-year old son. On arrival in the UK she was taken to a detention centre. Out of her mind with fear, she didn’t sleep, worried she would be beaten, tortured, even raped by the guards.

Yet despite how intimidating it might be, it would be worse still to go back. Zahra was politically active in Iran, defending women’s rights. This got her into trouble with the repressive government. If she were sent back she would be imprisoned and tortured. “The same as before,” she says, “and now if I go back home they will kill me.” Her voice cracks as she completes the sentence. She remains stoic. Zahra says she likes to paint portraits of women’s faces, showing the strength in their femininity.

Eight years have gone by and Zahra still doesn’t know whether she will be granted refugee status or sent back. The stress of this uncertainty can take a heavy toll on individuals who have already suffered traumas. Panic attacks and flashbacks can get worse and living in this purgatory, there is no room to move on with their lives. They are stuck in a narrative which defines them as a victim and an asylum seeker. Many have gone through experiences that have tested their faith in humanity and they are left to wait, at the mercy of strangers.

Disillusionment and loss of faith are not forms of trauma typically recognised, but these are just as significant as any other, says Renos Papadopoulos from the University of Essex and Director of the Centre for Trauma, Asylum and Refugees. Losing your home and cultural support system can lead to total despair.

“I lost my identity,” says Salim. “Even now I have this problem, it’s my home but if I go back I feel like a stranger.” He has become stuck between two countries and the longer he stays in the UK the more of a home it becomes.

When Salim eventually visited his home country, once it was safe to do so, he was shocked. “All my brothers have grown up, have kids. My mother is an old woman. It is like travelling to the future, like time travel.” He would ask after friends, cousins, his grandmother. Dead, was the reply.

He spent 12 years worried about his family’s safety and they had spent it worried about his. “Imagine your mum,” he says. “She misses you. Sometimes I ask myself, am I selfish? She’s feeling sick, always crying. She’s waiting.” Many asylum seekers are unable to be in contact with their families for reasons of safety. If knowledge of their whereabouts falls into the wrong hands, they might be hunted down or their family threatened. They often have to cut all ties and grieve for a family and home lost.

Salim said he feels powerless. “I think I am safe but my parents are not safe. I feel a little bit selfish.” Friends and family have died and he has been unable to do anything about it. It is understandable that many refugees and asylum seekers suffer from survivor’s guilt. They question why they have the right to survive while their family members remain in peril or have died. Stuck in National Asylum Support Service (NASS) accommodation, far out in the suburbs, not permitted to work, with only £36 a week, it can feel as if it were all for nothing. A sense of worthlessness and hopelessness takes over. Weeks and months blur into each other. These are often educated people and after everything they’ve been through, this lack of purpose can be harmful.

Words can seem inadequate when expressing what some of these people have gone through. “I need to explain myself with art,” says Salim. “I’m a shy person. I can’t explain myself, but I talk with my art. Some paintings are aggressive, some are happy, but I tell my story.”

Giving people like Salim the power to express themselves on their own terms means they have the space to express feelings around the traumas they have suffered without letting those experiences define them. While talking about trauma can be beneficial for some, for others it can run the risk of more deeply embedding the trauma. Some need to forget, others cannot. Either way, the art can allow them to focus on what empowers them.

Often asylum seekers have left their home country because they have a set of values they cannot live without. They have been persecuted for these. Yet focussing on those values can emphasise their strength. Zahra celebrates female strength in her paintings. She says it makes her feel free. “You draw just one line,” she says, “and it makes you happy. It’s coming out from your inside. The anger, the depression, the anxiety–it comes out from your hand and leaves it and it makes you feel relaxed and happy.” Some paint memories, good and bad; the scenic Kurdish mountains they miss, the small figure in a darkness they once were. Others paint from the imagination. The art provides an opportunity for an internal dialogue, taking them to their darkest places and their best ambitions. After each day of painting they are invited to show their work on the wall and open up that dialogue . It’s a vulnerable place in which to put themselves but allows them to tell their story, be heard and have the group bear witness. It provides a community, a safe space, a sense of purpose and progress.

When Salim got his British passport he felt like a human again. Now at the age of 44, he says he wants to be an artist and sell his paintings. “I want to do more art. I believe in myself.” He smiles and says “remember my name.” He also wants to go back to his home country for a period to spend time with his mother to make up for the lost time. Zahra feels at home in London. She comments on the respect she sees. On the bus, in the street, she says, people are respectful. “I feel very peaceful here.” Understandably she worries about her son. “He is my future, I am scared for him. He is my life.”

Art cannot change the past nor predict the future. Yet giving people like Salim and Zahra authorship over their narrative and a trusting space in which others can bear witness to those stories can make them feel human again and gives them a power they perhaps felt they didn’t have before. The New Art Studio is not alone in what it does but groups like them only scratch the surface of a problem that is playing out across the world and demonstrate how effective a blank canvas and a safe space can be. 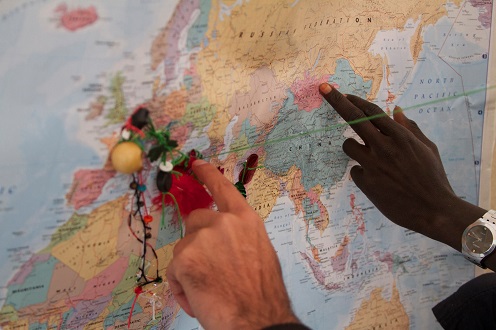